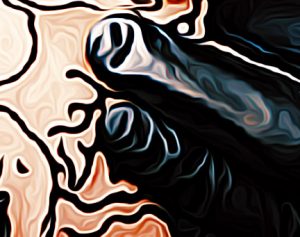 “How does this work, then? Living underground?” Lorenzo had many questions about how this would happen, but he figured Gideon would only have patience for a few.

Gideon led Lorenzo through a tunnel, light shining up ahead indicating its eventual end. “Essentials are chosen first, followed by the more… disposable workers. The cavern for New Melbourne spans about a fifty-kilometre diameter in all. They’ve essentially mapped out a smaller version of Melbourne’s metro area.”

“So this is basically like Snowslicer, except instead of a train at the end of the world, it’s an underground cavern.”

“Something like that,” Gideon said. “It’s not a poor comparison.”

“And you want to become Mr William?”

Gideon smirked. “No. I want to surpass him. You’re not thinking big enough.”

Lorenzo kept his mouth shut and nodded. Now he was starting to understand. He still didn’t get why Gideon wanted to visit a professional tribal tattooist, though.

“Why me?” he asked as they approached the light at the end of the tunnel.

“Something strange has been happening to people down here. Perhaps it’s something in the water, but people who spend significant amounts of time in the cavern are developing… magic.”

“Magic,” Gideon confirmed. “Powers based on their profession. Given you’ve visited a tattoo shop near Brisbane, I think you appreciate tattoos just as much as I do.”

“Interesting,” Lorenzo said, although he was sceptical about the whole thing. Surely it was just some hoax.

They came to the end of the tunnel, revealing the massive cavern before them. Far in the distance, Lorenzo could see the lights of a town – the first of many, he assumed.

“Take it all in, my tattoo-covered friend. All of this will be ours someday.”

Lorezno crossed his arms. “But nobody will know it. Rule from the shadows. That’s the idea, right?”