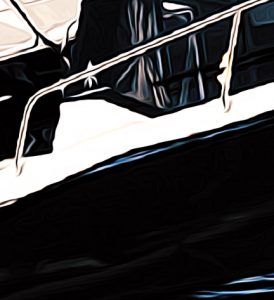 ‘Wow,’ I nodded approvingly as Jase gave me a tour of his new boat. ‘It’s nice.’

Jase busied himself with the heavy ropes tying his new toy to the dock and I took the opportunity to examine some of the art he’d purchased for the side of the hull.

‘You like that?’ he called out to me as he undid the gigantic knot. ‘Purchased that design from the experts.’

‘No kidding,’ I nodded, hiding a smirk. ‘Where do you get a custom boat decal?’ I asked.

‘Just some place my mate told me about, on the coast,’ he said, groaning as he stretched up to his feet. ‘What do you think?’

‘I think,’ I said, choosing my words diplomatically. ‘That it was designed and applied with a significant amount of skill.’

‘Right?!’ Jase chuckled, gazing up at it with pride. I quickly shed a quick sigh of relief that he hadn’t noticed me sidestepping the question.

‘What do you think of the design though?’ he asked.

‘Well,’ I began. ‘It certainly would have taken a lot of skill—’

‘What part of Ada do you hate the most?’ he asked, on the edge of tears.

‘The boat wrap,’ he sniffed, pointing. ‘I named her Ada.’

‘Ada,’ I frowned, nodding my head as the name sat in my mouth. ‘Interesting.’

‘Why do you hate her?’ he asked, more annoyed than upset at least.

‘What? You can say it, I promise I won’t react badly.’